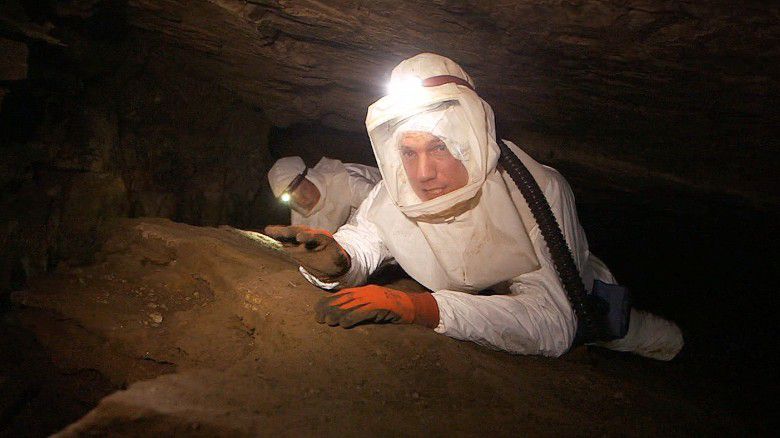 It is a slow and cumbersome descent hindered by head-to-toe protective suits. A wooden ladder dips down the side, as two researchers in white suits and respirators make their way into Grootboom cave in South Africa.

The suits make the journey more cumbersome, but they are the only things standing between safety and exposure.

Inside the cave, thousands of bats either cling tightly to the walls or fly around in bunches. Any number of them could contain deadly pathogens.

Without the suits, the researchers are vulnerable to any potential zoonotic diseases the bats could be harboring, which could transmit from animals into humans.

In this particular part of the cave are long-fingered bats. Wanda Markotter, a researcher with the University of Pretoria, catches ones inside a net and slowly stretches out its wing.

"This specific species has been implicated in some of the rabies-related viruses," Markotter says. "They are in high-population densities, and people are going to come in close contact with them."

That's the other important part about this location. This is not some remote cave; this is only miles away from the densely populated of city of Johannesburg.

"There are 1,240 species [of bats] worldwide," Markotter says. "So they represent a big group of mammals and that's why we probably find a lot of viruses in them."

Researchers are tracking animals here in South Africa, and all around the world, as a form of early-warning system for diseases that could come to humans. It is widely believed, for instance, that the first cases of Ebola began with a bat.

In 2014, West Africa saw an unprecedented outbreak of the Ebola virus, with cases concentrated in Sierra Leone, Liberia, and Guinea. The disease was first discovered in 1976 in what is now the Democratic Republic of Congo and there have been multiple outbreaks since that were well-controlled, but today things are more challenging. In a time where international travel has connected the world more than ever before, it takes a coordinated, global effort to prevent a widespread outbreak -- as the 2014 outbreak showed us.

Much of that coordination happens at the headquarters of the Centers for Disease Control and Prevention in Atlanta, Georgia. The CDC oversees 10 global disease detection centers around the world, including in South Africa, where constant monitoring is taking place.

"We were tracking almost 300 infectious disease outbreaks of concern in 145 countries," says Dr. Jordan Tappero, director of the Global Health Protection Center at CDC. This was during a 2-year period.

"Only about 30% of countries even self-report [and] are able to prevent, detect, and respond to infectious disease outbreaks," Tappero says. "We are working around the world to try and improve capacity so that we have partners everywhere to respond quickly."

That monitoring starts with teams on the ground in caves like Grootboom.

The team now crawls through a narrow gap to reach a difference chamber, where different species of bats with other potential pathogens live. Each bat has the potential to carry rabies, Marburg, even Ebola. These are some of the planet's deadliest, but least understood, viruses.

The risk is justified by the importance of the work as it is in the interest of public health, says Markotter.

"If you don't know what's in the animals, you won't be able to identify a human outbreak quickly," she says. "Most of the time we only respond when there are lots of human deaths and we don't know where the virus came from, or where the pathogen came from."

Outside the mouth of the cave, a makeshift lab comes to life under a white pop-up tent. Bats collected from various parts of the cave are tested, samples are collected from their mouths, fur, and wings and everything is meticulously recorded. This is all part of the constant monitoring and early warning systems.

If the team knows what's circulating in the bats, they can flag it and alert the population to take precautions, or watch for certain symptoms. Their efforts will matter to keep this closely-connected world healthy.

Discover our Tyvek® and Tychem® products

Find the right protective product for your job with SafeSPEC™.